Over the past week I've been suffering in my hot box of an apartment wondering about when Entergy, the local power monopoly, would restore power and start charging me for the electricity I desperately needed. While my power was out and my apartment felt like the Satan's armpit, I decided to venture out into the world, interact with other sweaty humans, as well as survey the damage to other people's cars and homes in a vain attempt to feel better about my own situation. Unexpectedly, however, I noticed that some businesses which also didn't have power were serving customers. The sight of a waiter drenched in sweat serving tapas to a customer, who also seemed to have jumped into a pool before sitting down to eat, inspired this blog entry.

An important part of the entrepreneurship equation and a skill that differentiates great entrepreneurs from former entrepreneurs is the ability to identify and take advantage of opportunities. Opportunities emerge from a complex pattern of changing conditions and can be leveraged if an individual or organization is primed to fulfill a need, address a pain, or quickly fill a gap. JFK famously said in a speech delivered in Indianapolis in 1959 that "...when written in Chinese the word crisis is composed of two characters.One represents danger, and the other represents opportunity." While linguists have criticized the incorrect translation of wēijī, his point is well taken. A crisis, such as the weather event and aftermath we just experienced in New Orleans can be tragic, can trigger anxiety, remind folks of sad memories of a recent past, but it can also be an opportunity. It is, after all, a stark break in everyone's daily routine that can lead even the most regimented individual to see the world around her in a new light, to notice an open ice cream parlor they had never noticed before, to shop at a local mini mart, etc.

Some New Orleans businesses were masterful in how they turned a few days of lost power into a chance to attract new customers and create deeper relationships with customers that had no choice but to come to them for a break from the monotony of their newly medieval homes. Slim Goodies Diner, on Magazine near Louisiana, took their red booths out of their restaurants and into the street and created a limited menu. I got eggs, bacon and hash. A few of the restaurants that didn't lose power in the CBD welcomed patrons from Uptown and Mid-city that they might have never seen before. I was surprised to find Carmo, a Brazilian fusion restaurant and bar on Julia St. with lots of vegan options, open and serving dinner just a few hours after the heaviest rains stopped coming around. I had a Feijoada for the first time in a long time. Even the restaurants that struggled to open or were partially opened were lauded by their patrons and Facebook followers: http://www.inthenola.com/news/nola-living/item/3704-ten-things-we-learned-from-hurricane-isaac.html 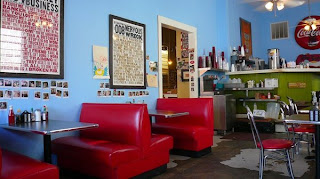 Other restaurants, particularly the chain restaurants and those too new to have a dedicated waitstaff, remained closed and missed out on a hungry and adventurous clientele that would have loved anything they ate after eating Vienna Sausages (see image below) for three days straight. 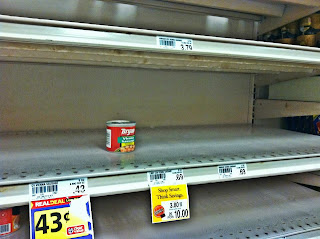